The mortals are mad and the fairies spectacular in New York City Ballet’s new production of “A Midsummer Night’s Dream” at the Kennedy Center. This joyful spectacle is wonderfully playful and richly produced.

Drawing inspiration from Shakespeare’s play, the ballet dispenses with rapid character introductions at the start, centering the action of the first act in the woods – the domain of fairy royalty Oberon (Roman Mejia) and Titania (Miriam Miller). Early in our story, the Fairy King and Queen fight, Oberon believing that Titania’s adopted son belongs to him and she strongly disagrees. They retreat to their separate realms, beautifully realized by David Hays’ set design of intertwining leaves and vines.

Karinska’s outstanding costumes also help bring the magic of the story to life. Oberon’s golden tunic and laurel link the plot to its original setting in ancient Greece, as do the other actors’ traditional draperies and capes. The fairy suites, including a charming younger cast, reflect their natural surroundings, twirling like flowers, ladybugs and butterflies.

Into this magical forest kingdom enter the beleaguered and oblivious mortals – two groups of lovers and a group of shopkeepers rehearsing a play. Much of the humor in the often funny production comes from Oberon’s mischievous henchman, Puck, who torments humans. Troy Schumacher as the green-haired satyr makes a meal of the role, swirling around the confused lovers, assaulting the audience when he cheats on them again and again. 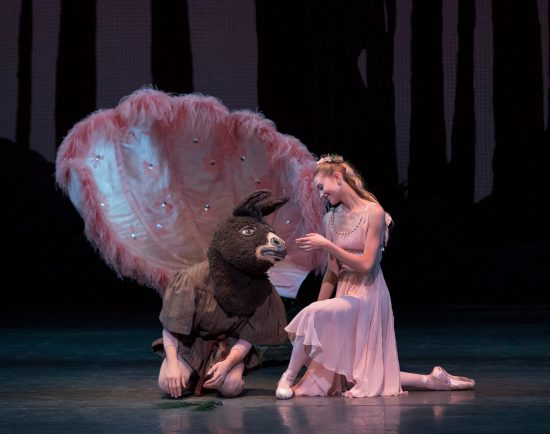 Cameron Diecka as Bottom and Miriam Miller in ‘A Midsummer Night’s Dream’. Photo by Paul Kolnik.

George Balanchine’s original choreography offers a bit of everything, from the humorous to the grandiose. Miriam Miller as Titania performs a beautiful pas de deux at the start of the show with a fairy in her retinue. Later, bewitched by Puck, she falls in love with Bottom (Christopher Grant) a shopkeeper who appears as an ass (also Puck’s doing). The lovers’ unlikely dance is funny, as the ungainly Bottom seems more interested in eating grass than the fairy queen.

Mendelssohn’s varied and catchy score comically includes the hee-haw sound Bottom makes as the donkey. The inclusion of choristers, with lyrics from Shakespeare’s text, adds an ethereal dimension to the already enchanting spectacle, which closes the curtain with scenes of found love, mending rifts and restoring order.