Truman Phinney has been entrenched in the Denver music scene for as long as he can remember, going to Red Rocks gigs and occasionally skipping school to be front-row in theaters. He had always been into hip-hop, but once he entered the EDM scene, he didn’t look back. But he wasn’t just in love with the music: he was captivated by the creative fashions worn by ravers.

So Phinney, a 21-year-old recent graduate of Rocky Mountain College of Art + Design, set out to document how EDM fan styles not only reflected their personalities, but created an overall foundation for creative expression. He encountered his subjects in a variety of ways, including at concerts and through social media, but all photos are thematically linked by Phinney’s use of lighting and color to reflect the spiritual layer that made the genre so special to him.

West word: What made you want to start this project?

Truman Phinney: I started in the fall of 2021, and what really inspired me was that I really enjoyed the whole aesthetic. I’ve always wanted to learn more about Denver’s EDM community, but every time I tried to explore it on my own, I ran into obstacles and got a little lost along the way. So I figured the best way to get to know the community and the music would be to just find people [to photograph]because every day on Instagram I will see awesome outfits from all kinds of people who go to fashion shows.

I invited a few people to shoot, and that’s kind of where the idea started. In the very early stages of this project, I was trying to take pictures at the tailgates of Red Rocks and just around the venue. But the more I got into it, the more I realized that fashion was really the thing I connected with. And I really wanted to showcase it in a way that emphasizes the spiritual and soul aspect of every person who wears these clothes. A lot of the lighting design and stuff that I do in my photos is sort of bringing out what you can’t tell about a person just by seeing a portrait of them.

What EDM subgenres did you watch?

EDM has a huge variety of different styles and a whole vocabulary for it. I was talking to people, and they were like, “Oh, I really like deep house music” or “I really like ethereal, crunchy drum and bass. One of the biggest was kind of organic, tribal EDM, and one of the really big artists right now for that is CloZee; a lot of people I’ve photographed really like his music. Another person I was touring with was much more into the grungy, underground side of Denver EDM. The Black Box puts on a lot of shows where there are a lot of smaller artists, and one of my role models, Ryan, told me a lot about how just being in that scene really led her to find new artists and explore the more experimental side of Denver’s EDM.

One thing I kept thinking about when I was doing these shoots was how much the EDM scene is very aligned with that 1960s psychedelic rock feeling – it was all kind of a Woodstock energy. One of my role models was really into early 2010s Skrillex-type dubstep and was also into the hard techno stuff a lot. There is certainly variety and a lot of subtlety in the subgenres.

Did you find a marked difference between fashion styles within subgenres?

I think some of the biggest differences were with Ryan, who is into early 2010s dubstep, really into Skrillex and Deadmau5, and she kind of had a more gothic look – others were a lot more colorful. She was in a big black coat and had this corset situation going on. One of the things you really notice when you photograph all these people is their jewelry and the different meanings of the bracelets – which are called “candy” and are exchanged at shows – and the expression that goes with it.

Her sweets had a spooky, gothic feel; one of them said Jigsaw, because she really loves horror movies and loves the Halloween aesthetic. Another stark difference I saw was with another girl I photographed, Ryann, who is really deep into the local scene. One of the trends she was telling me about that is really popular in EDM right now is getting these singlets for different shows. It was really interesting because a lot of the fashion you see involves dresses, different tops, and colorful fishnets. Apparently these websites make jerseys for a variety of different artists. So there will be shows you go to and some people are decked out in their full rave gear, and some are just more casual in singlets.

And when it comes to the more tribal and witty rave scene, you’ll see a lot of bright, flowing scarves and big outfits compared to the grungier techno, where you see a lot more patterns like chains and more aggressive materials. .

Were there any fashion styles you found that crossed different subgenres or even completely different genres, like metal, rock or jam?

I feel like candy is pretty universal, just because there’s something about having this physical hardware to connect to a show or to connect to something else, and kind of expand that . People like to have artifacts from these shows; I collected really random things to remember those times, like, “Oh, here’s a piece of confetti that’s stuck on my wall now.”

In my photos with Skyler, I really thought that out of everyone, her look and vibe reflected the music she loved the most, like CloZee, the tribal stuff. But she also told me that she liked surf rock and that she liked the Grateful Dead. Her dress was super swirly and gave off such a 60s vibe. And if you look at her earrings, they’re huge psychedelic hoops that you might see at a nightclub or something. And Ryan Jane, in her goth look – I know she also listens to a lot of hip-hop and alternative music and a lot of metal, in particular, and I think you can definitely say her look is inspired to go to a lot of these shows.

How can fashion be used to express your own outside interests or position on the stage?

Another of the girls, California Summer — at the time we were filming she was vice president of the University of Colorado EDM club — brought a fan and a bunch of other stuff to the shoot. … You can really tell that she knows a lot about the scene by what she wears, with all her festival bracelets and candies. And with Kaya, she’s a yoga trainer, and I think her style reflects that – it’s much more of a workout outfit.

But another thing that I think is really important for expression is a lot of tattoos I’ve come across – so cool, very psychedelic-inspired tattoos. Some of my favorites were from Casey, and she had these super gnarly tattoos on the back of her sacred geometry legs.

Sacred Geometry is often linked to psychedelics, which feature prominently in music scenes whose fans lean towards EDM, such as the jam band scene. How would you say psychedelics fit into the EDM scene and fashion?

I think psychedelics and psychedelia in general are an integral part of EDM. That’s why I keep bringing up the word “spiritual” because it really reminds me of what’s going on deep within these people beyond their mode. When you go to EDM shows, you’re so focused on the music, the visuals, and the dancing, and it’s all about nothing but the experience. I think the almost meditative visuals your brain produces during a show – whether you’re on psychedelics or not – speaks volumes about the artistry and ethos of the EDM community. And I think that’s why there’s such a friendly and welcoming community. At raves, you always hear about PLUR: peace, love, unity and respect. It’s so true. I feel like I barely know all of these people, but I could trust them if I needed to. 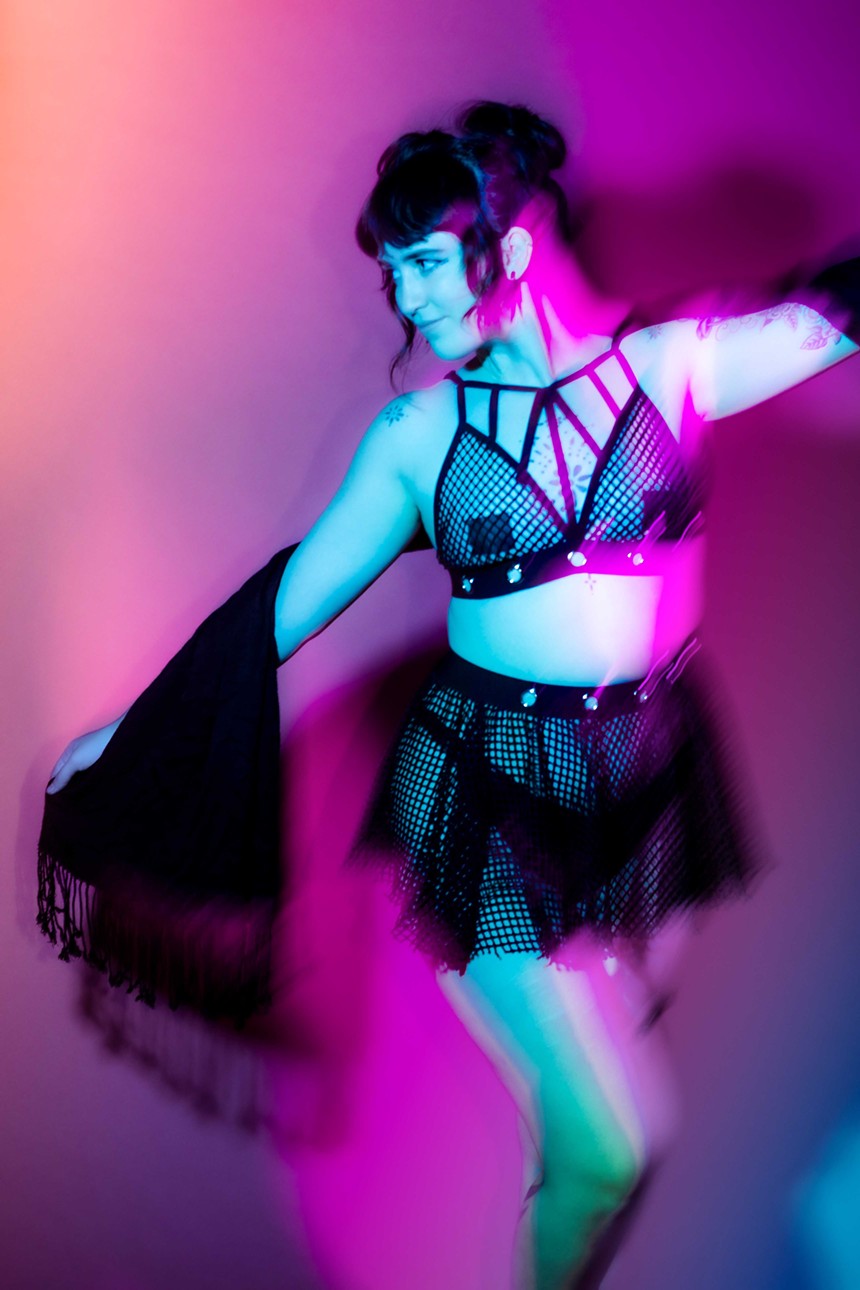 What did you find in the different styles that reflected the ethos of the EDM scene in Denver as a whole?

I honestly think this is one of the most positive and friendliest social groups of any genre that I have ever experienced. Everyone gets along, and you see the groups of friends where no one dresses the same – they all have their own aesthetic. And I just think it’s such a great center of self-expression, extending from what you see yourself as – as your everyday self.

Going back to candy, it’s like a huge thing to easily reflect on who you are and show off your EDM pride. There’s also creating for yourself and building your own outfits. [The scene] really makes you want to produce things for yourself and see what you’re actually capable of, and the physical artifacts are a huge memory attachment and show the importance of how music speaks to you, to your mind and to your soul. Your thoughts go out into creation.

That’s why I think a lot of them are way more free, colorful and exciting than we see in the everyday world. It’s really people connecting to their spirituality, whether it’s just through music or their own mind or whatever. I really think it’s an expression of his soul and his energy in a situation like that. 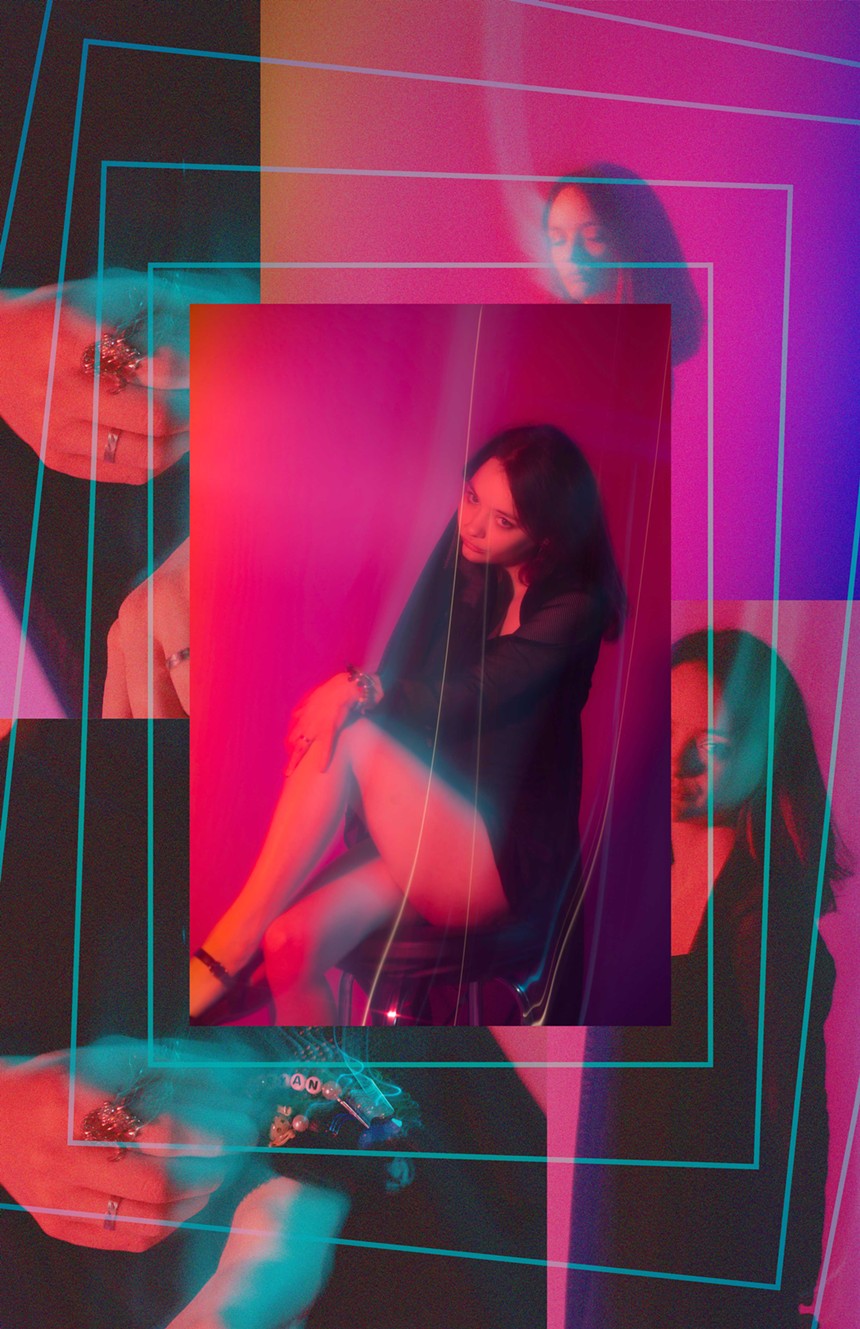